skip to main | skip to sidebar

Yes, it's the return of one of my all time favorite Halloween characters, Wicked Jack - sporting an eye patch he acquired after a freak pumpkin carving accident... 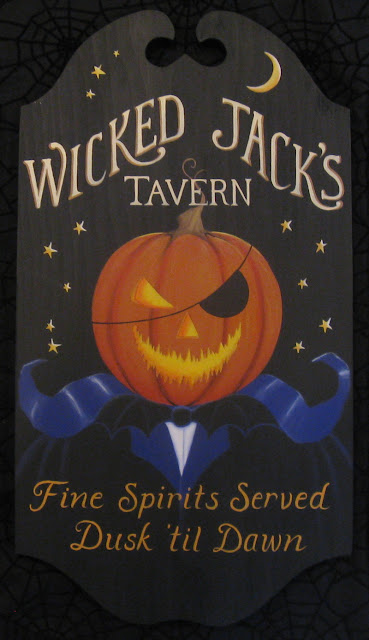 Hand painted in acrylics on a solid pine innkeeper's sign, and finished with a clear acrylic varnish, the sign measures 11" x 20 1/2", and comes with a sawtooth hanger for easy display indoors or out. I think he'd make a fabulous addition to any Halloween decor (although I think I'd leave him up year round, hehe).

$185 plus shipping. As always, this piece is up for grabs on a first-come basis. To purchase, please email me at carolee@kingofmice.com .

A Mad Tea Party and Giveaway!

Is it that time already???

It can't be! The years fly by so quickly these days, I feel like the White Rabbit himself, scurrying about....late, late, late...

Still, one must take a break sometimes, don't you think?

As a lover of All Things Tea, Miss Vanessa Valencia's annual Mad Tea Party is a must, and this year it just couldn't have come at a better time. For those of you new to the event, this is a cyber tea party and blog hop. Bloggers from all over the word are joining in the fun today, "sharing" virtual tea and chat, sometimes a giveaway (read on!), discovering new blogs and new friends, and of course delighting in the original (and fabulously over-the-top) Mad Tea Party, which Vanessa posts annually on her own blog, "A Fanciful Twist".

You can begin there, where you'll find a list of participating bloggers, and join each of us (or some of us, as time allows), for a cyber cuppa. ♥

Here the northeast (and other parts of the US, I'm sure), it's been a bit of a sauna lately...Hot, hot, HOT, and no end in sight. With this in mind, I'm breaking with tradition this year, and offering up some iced tea... 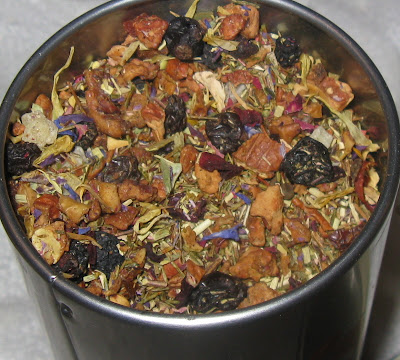 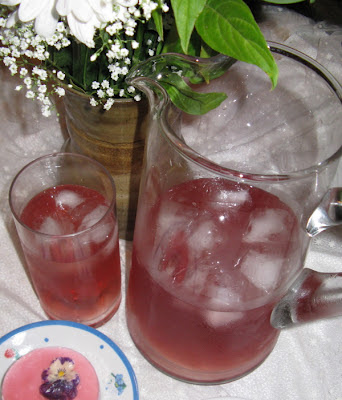 Seriously good iced tea. The Mice President (a.k.a. hubby) even likes it, which is saying something for a Brit who loves his traditional Red Rose. ;)

I'm serving it with a blood orange mousse... 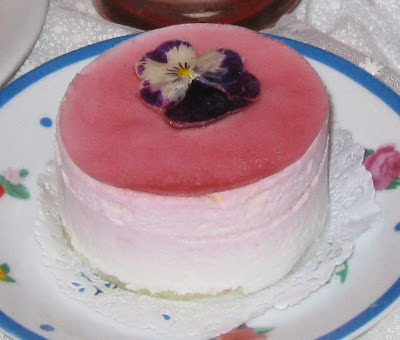 I cannot tell a lie.

I'm preparing for an art show at the moment, so I cheated and bought the mousse. I usually bake cupcakes or tarts or something, but there just wasn't time, and I had to have something to offer you. ;)

And speaking of something to offer...I'm having a little giveaway too (have to make up for the store-bought mousse, right?) Hehe...

Alice tumbling down the rabbit hole.... 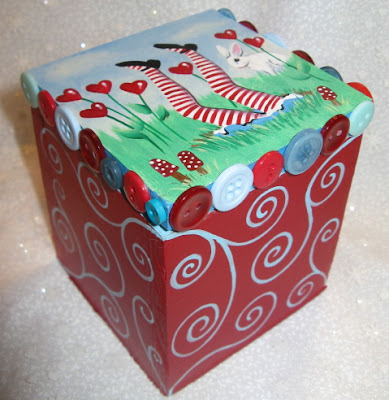 A small, wooden trinket box, hand painted by *me*, embellished with buttons, and finished with a bit of lettering inside... 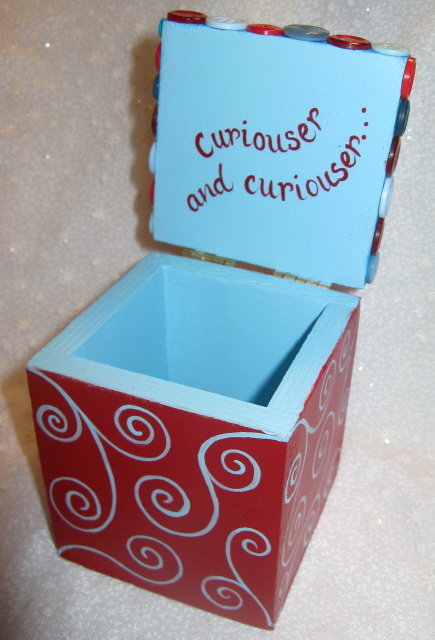 All you need do to enter is to leave a comment here. Be sure to include a way to contact you - your blog or email address. I will draw a name one week from today, Saturday, August 4th, at 9PM eastern time.

And now, I'm off to visit some of those other blogs...

Thank you ever so much for dropping by, and please do come back again! Working at home as I do, I just love visitors!

Until next time,
♥ Carolee

Every once in a while, I paint a piece that I soooooo wish I could keep, and this is most definitely one of those times, hehe....

Painted after the scene in "Practical Magic" where the Aunts conjure up a batch of "Midnight Margaritas".... 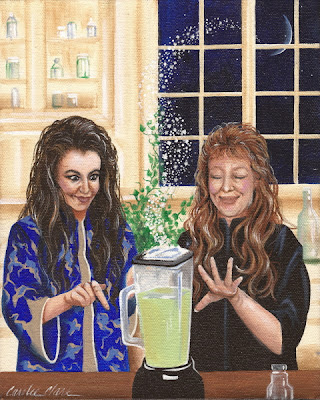 Acrylic on canvas, 8" x 10" x 1 1/2, with the incantation from the movie hand lettered around the edge in margarita lime green... 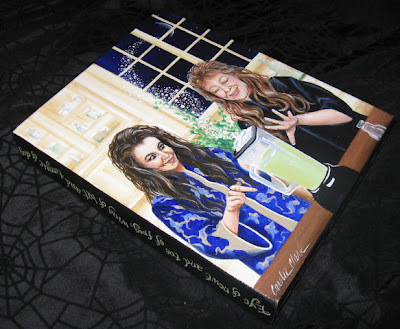 It's up for grabs on Etsy now, and I can't wait to see who captures it!

Do you ever ponder how the internet has broadened our horizons, not only in terms of information, but in terms of friendship?

I mean, think about it! Truly overwhelming.

Since I began sharing my work online, I've meet so many amazing people from all over the world; people with whom I feel a genuine connection. Inspiring people. Kind people. Generous people. Friends.

And yes, there have also been those I've met who were dramatic and draining. But they're few and far between. Most have been an absolute delight - and have enriched my simple little life in ways I never could have imagined.

Thanks to the *magic* of technology (and to me, this computer is pure magic, hehe), I'm able to work at home, offering my humble creations to collectors all over the globe.

I connect with fellow artists, offering and receiving support and encouragement, sharing inspiration, triumphs and failures, ups and downs.

I've traveled the open road and experienced the wonder of new places with a true kindred spirit.

I've shared laughter and meals and conversation with people I admire and whose company is a blessing.

My world is bigger, my horizons are broader, my mind is open, and my soul enriched. I'm humbled and amazed at this time in which we live, and consider myself  incredibly blessed to be both witness and participant.

And to each of you I've met, and those I haven't yet, whether you read here in silence, or reach out with a comment, know this:

Until next time,
♥ Carolee

Enchanting blogger Vanessa Valencia, over at A Fanciful Twist, is hosting her annual Mad Tea Party! On July 28th (which is almost my birthday!) bloggers and readers from all over the globe will gather for a virtual tea party and blog hop...

I'll be working on my party post over the next couple of weeks, and it will include a giveaway, so stay tuned...

In the meantime, look for another newsletter! I'm trying something new - writing monthly rather than quarterly, and would love to hear feedback - Too much? Just enough? Let me know your thoughts....

Just popping in to share the latest Etsy offering... 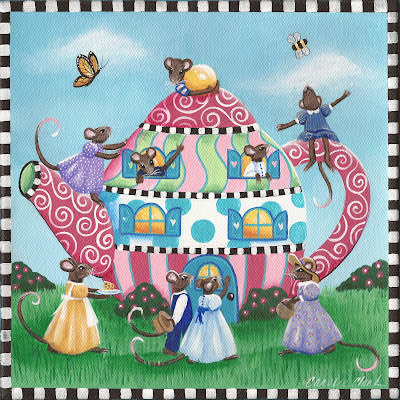 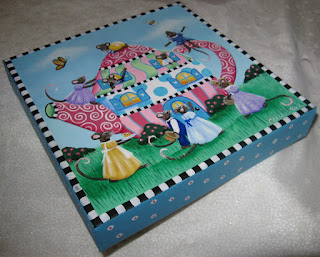 Listed now on Etsy, and looking for a good home. :)

In the studio, things have been crazy-busy. I'm making progress on a few commissions, and have several Ghoultide Gathering pieces in various stages of completion. No photos of those, but I'll share a couple of the commissioned pieces.

The first is one of the Full Moon Goddess series, an 8" x 10" painting on canvas. This is Selene, Lunar Goddess, and divine manfestation of the moon itself, chosen to represent the Blue Moon.... 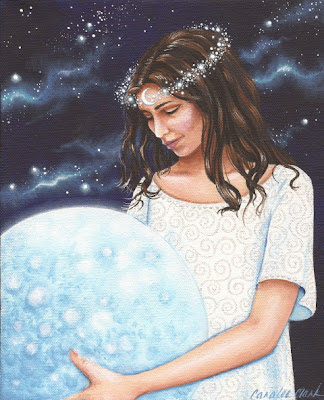 She'll be available as a print later in the year. :)

The second piece is an oval, bentwood box, with an adorable little mouse... 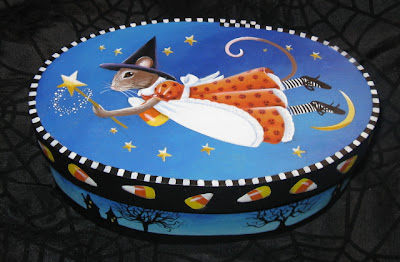 Sooooooo much fun to paint. I have a few of these little boxes in stock, as well as a few canvases, so if anyone would like to arrange a commission, just shoot me an email. :)


Upcoming work includes another Mouse House painting, a "Practical Magic" inspired stationery box, and possibly a painting, as well as a new hare painting, and a large platter with Halloween cats. These pieces will all be up for grabs on Etsy, unless someone claims them first...I'm sorry to be so vague about availability, and I do try to be fair, but with medical expenses mounting (read on), it's necessary to sell each piece as soon as I possibly can.

On the home front, this past week has been quite the roller coaster ride; some high highs, some low lows, and not much of an even keel, although we're hoping to get back to level ground soon.

Regular readers know John's health has been an ongoing challenge; multiple heart surgeries, congestive heart failure, COPD, and non-hodgkins lymphoma - each with its own set of complications. Without getting too technical, suffice to say that not only has his breathing been getting worse, but last Thursday we received the news that he is once again out of remission.

Radiation therapy was started immediately, with four treatments per week at Temple University Hospital (quite the commute from Lancaster County), for the next five weeks, and probably several follow-ups after that. We've been through this before, and remain optimistic about another remission, but this is NOT the news we wanted to hear.

Riding to the to the top of the roller coaster, was the news of the Supreme Court decision upholding the Affordable Care Act. Now, I don't like to get political here, and I do realize that good people differ on this issue. But I am here to tell you that this decision may literally save John's life. With an end to caps and pre-existing condition denials, it means that whatever happens with his employment, he can still get care. And that's HUGE. I had tears in my eyes when I read the news. Because for us, this issue isn't abstract, it's personal. And I can't tell you how much it hurts when people (especially friends and family) tell us that they're against it anyway. Sorry, but money and politics should never be more important than someone's life. Period.

In the middle of all this turmoil, the latest round of treatment, etc., came Independence Day -- which was spent as it it usually is, calming and comforting the furkids as our neighbors set off illegal fireworks. Every year we talk about hosting a party or cookout (sans explosives of course), and every year we end up "home alone",  a party of two (OK, seven if you count the furry people). I hope to remedy this by summer's end though, and have a large barbeque/potluck. Maybe a celebration of sorts when John's treatments are over. ;)

Finally, a huge thank you to everyone who's been so supportive throughout this ordeal. Knowing that we're held close in thought, and lifted up in prayer gives us strength. Sometimes the only way out of difficult situation is through it - and we forge ahead knowing we are truly blessed.

Until next time, much love,
♥ Carolee

I accept a limited number of commissions each year, on a very selective basis, with the understanding that the painting process can be a walk down an unknown path - as much for the artist as for the commissioner. I work best, and most successfully when creating freely, and with minimal direction, and find that most pieces evolve of their own accord - leading me on a sometimes unexpected, but always magical journey.

If you are comfortable with this, and interested in a commissioned piece, please drop me a line at carolee@kingofmice.com for terms and time frames. :)

Follow this blog to receive updates and giveaway information

Carolee
Ephrata, PA, United States
I'm a full time Halloween and fantasy artist, inspired by all things magical, wicked and whimsical. Please grab a cup of your favorite brew and browse my work and musings - and do leave a comment or drop me a line - I LOVE hearing from you! 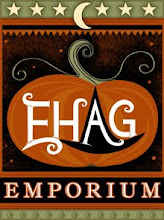 King of Mice Studios in Print 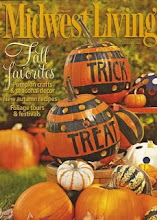 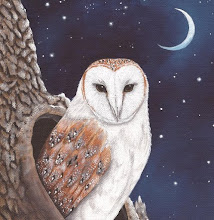 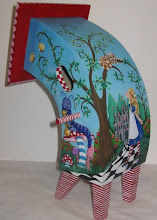 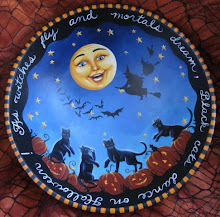 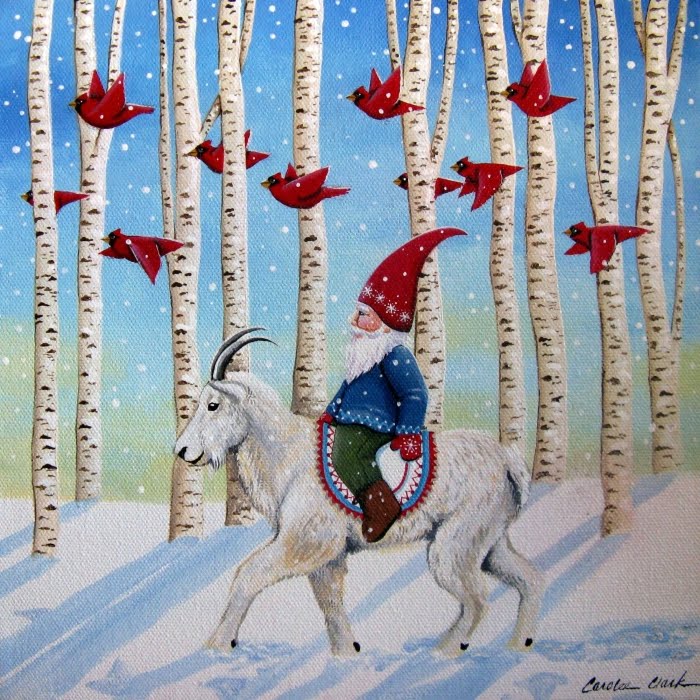 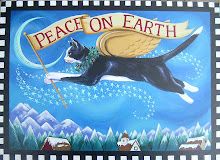 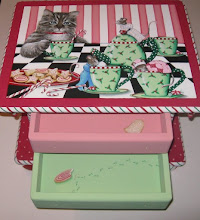 Feline Wheel of the Year 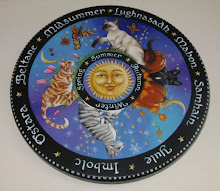 All artwork and text on this site © King of Mice Studios.